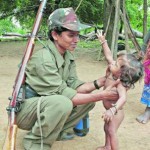 Giving arms to a few ignorant women can never be called arming women to liberate themselves from all shackles of social and economic exploitation.
Mao se Dong, the patriarch of Chinese revolution once hailed the woman folk as “half of the sky”. The PWG Naxalites, who claim him as their hero, have made them “Half of the Jungle”. This editorial was written in the year 2000. The plight of the ‘second sex’ in Naxalite movement is more or less the same. The erstwhile PWG is part of the Maoist Party now. This merger too hasn’t brought any light to the women in olive green uniform.